The following free woodworking plan for a benchtop spill plane was provided by Christopher Swingley. Check out his website for other interesting information.

Here's some construction details and photos for the benchtop spill plane Roy Underhill made in The Woodwright's Shop (2002 season, episode 2205). A spill plane is used to make long tightly curled shavings (called spills) that were used to move fire around in a home, the way a match would be used today. Most spill planes were craftsman made and used to convert any scrap into spills for his home or to offer at the local pub for a beer. A jar of spills would be kept on the mantle for use in lighting a candle or pipe from the fireplace.

This particular version is a benchtop spill plane, which means the plane is held to the bench and a scrap of wood is passed over the plane to produce a spill.

Here's what the spill plane looks like in use. The wood is passed over the iron and a long curly spill zips out of the opening on the right side of the plane. The plane is held to the bench via clamps, or is held in a wooden vise. This particular version is made from hard maple, but several of the images show a plane made from mahogany. 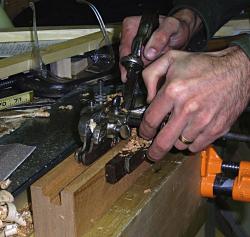 The first step after finding a suitable blank (2 inches thick, 3 inches high, 10 - 14 inches long) and squaring it is to plow a groove in the top that the scrap wood will ride in. On my planes this groove is 5/8 inches deep and about 7/8 inches wide.

I milled my groove using a Stanley #45 multi-plane in two passes. The image on the right shows the second half of the groove being milled. You could use a wooden plow, a dado plane, or if you have no specialty planes, a groove can be milled by sawing the sides and chiseling out the waste.

Once the groove has been rough cut using the plow plane the floor of the groove needs to be made flat. If there is any curvature in the groove, the scrap will ride over the high spots and may not properly engage the iron along the full length of the scrap. A router (plane!) is perfect for this task because you can set the iron for a particular depth and when it no longer cuts, you know the surface is flat. Hold the plane carefully because the sides of the groove don't offer much support for the plane.

The layout for this project involves angles of 28, 30 and 45 degrees. If you're not lucky enough to own an adjustable square with a protractor head, the easiest way to accurately set these angles is to draw the angle on a scrap of wood by drawing a line between rise and run values from a carpenter's square, and then setting your bevel gauge to these lines. If you don't know what the appropriate rise and run values for an angle are, consult this table of values.

The image shows the layout lines on the right side of the spill plane. For the details of the layout, please consult the PDF plans (90 KB) for this project. I'll summarize them here, but there is a better description in this document. Starting from the right side of the plane (as viewed from the back) draw a line parallel to the top of the plane 1 inch below the depth of the groove. Next, draw a 30 degrees line from the top of the side to the 1 inch line. This line should end 2 - 3 inches from the right edge (the front from this view) of the plane. Draw a third line at 45 degrees, starting 2 inches to the left of the intersection of the 30 degree line and the 1 inch line. At this point you should have the bottom of a triangle where the bottom is 2 inches long and parallel to the top of the plane, the right arm is inclined at 30 degrees and the left arm is inclined 45 degrees. This is the triangle you can see in the image to the right.

Turn the plane to view the top. From the intersection of the 30 degree line with the top, draw a line a 28 degrees across the top of the plane. Draw a second line that connects the end of the 45 degree line to the end of the 28 degree line. Viewing the plane from the top, you should see a triangle with the bottom matching the distance between the 30 and 45 degree lines at the arris between the right side and the top. The right arm of the triangle will be inclined (to the left, or back of the plane) at 28 degrees. The left arm connects the triangle.

Turn the plane to view the left side. Draw another line parallel to the top and 1 inch below the depth of the groove. Starting from the point where the two lines across the top reach the top of the left side, draw a 30 degree and a 45 degree line down to the 1 inch line. These lines should be sloped in the same direction as the lines on the right side (you're going to have to cut along these lines with a saw next -- make the lines canted the same way so a saw cutting along the top and right side lines will automatically hit the lines on the left side). The image on the left shows the left side layout, and sawing along the 45 degree line. 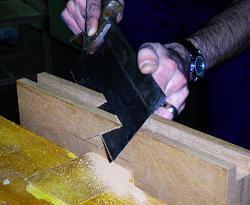 Whew! Again, if you want more details on the layout, please consult the plans. After the layout is set, saw along the insides of these lines. We're trying to remove the material inside the triangles I was discussing before, so try to stay on the insides of the lines. Also, the smoother the sawcuts, the better the seating of the iron and wedge, so use a finely set backsaw with a lot of teeth per inch. Try not to change direction or you'll create deep furrows in the bed. I found that cutting the 45 degree line first is easiest because it's less angled, and once cut, you have a kerf that the front of the saw can ride in when cutting the 30 degree line. The image on the right shows me cutting the 30 degree side. 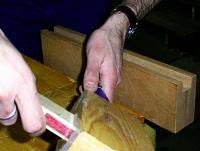 Once you've sawed down the layout lines to the bottom (the line 1 inch down from the depth of the groove is the bottom), carefully chop out the waste with a chisel. Be careful not to dig the chisel into the edges of the mortise -- the severely acute angles and tight spaces make it hard to work. After chopping out the majority of the waste, spend some time flattening the mortise with a small chisel. The flatter the bottom is, the less the wedge will want to rock in the mortise and the tighter the iron can be set.

At this point we've got the plane body finished and all we've got left is to craft the iron and wedge. We'll make the iron from an old saw blade. Any hard high-carbon steel would work, but a saw blade is an available source, and the iron doesn't need to be very thick for this plane. A lawnmower blade would also work, but it'll take more effort to get a blade out of it because it's thicker metal.

To get the iron out of the saw, mark a 1 inch wide by 6 inch long rectangle in the blade and score the blade using a cold chisel or sharp file. I used a cold chisel against a railroad rail. The image on the right shows this operation on the thick steel plate on my bench. This technique works, but a heavier "anvil" is better. Wear eye and ear protection. After deeply scoring the blade you should be able to snap the iron away from the blade by setting the blade in a vise with the edge of the vise along the scored line. Again, wear eye protection, as well as gloves and think about where your hands and arms will wind up when the blade breaks -- the edges will be very sharp.

Next, grind the iron flat, and then grind a 30 degree bezel on the iron. Sharpen the iron using your favorite sharpening technique. I ground the iron using a hand cranked grinder (shown on the left), and then sharpened the iron using sandpaper on a plate of glass. At this point it's not necessary to get the iron razor sharp -- we'll tune the plane, trim the iron to size and sharpen it later. 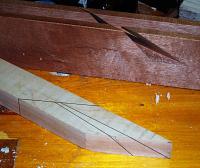 The way I figured out how to cut the wedge was to start with a piece of wood (shown on the right, as it would be inserted into the plane body) and cut one end off at the angle marked across the top of the plane. When marking the angles and lines on the wood for the wedge, be sure to set the bevel gauge from the plane body so you're getting the actual angles as sawn.

Once you've cut off the end, the layout lines are drawn as shown. Make the recently sawn edge match the triangle on the right side of the plane. Then draw the 28 degree line on the far end of the piece of wood to match the thickness of the plane body. Extend the lines across the top of the wedge using the angles measured from the plane. 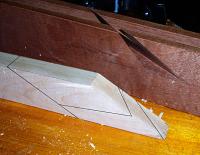 The layout lines moving across the bottom of the plane are measured and marked out the same way.

Once all the lines are marked out, you're ready to carefully saw down these lines. (Note that I've darkened the layout lines and saw kerf in these images to make it easier to see what I'm doing).

I used a normal rip saw with a finer TPI pattern to saw out the wedge. If you have a back saw with a deep body and filed in a rip pattern, this would probably work better. Don't start with a back saw and finish with a different saw because you'll wind up with a step in the wedge sides where you started cutting with the thicker (and probably greater set) saw. After sawing down the layout lines, saw across the wood to free the wedge.

The wedge probably won't fit properly right after you release it (at least mine didn't!), so you'll need to do a lot of tweaking to get it to seat properly across the front and back of the wedge. Depending on the thickness of the piece of wood you used to cut the wedge, you'll also have to make it thinner so the wedge seats slightly (like 1/8") below the bottom of the groove. Thin the wedge slowly -- you want the wedge to sit as high up the iron as possible, while still allowing the shavings to exit the right side of the plane without jamming under the wedge. I used a combination of chisels, hand planes, scrapers and sandpaper to fit my wedge. Holding a larger low angle plane (L-N 164 in my case) upside-down and moving the wedge over the iron proved to be the best technique for fitting, and thinning the wedge.

The image on the right is a close up of the spill exiting the right side of the plane. You can see the tight curl, and the shape of the mortise. In this plane, the wedge is make of fir from a scrap of 2 x 4. 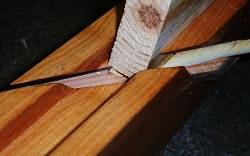 On the left is a great shot of the very end of the scrap being trimmed by the severely skewed iron. You can see how the iron peels off the spill and the curling of the shaving as it emerges from the plane.

Chris created a PDF document of the plans. Swingley-benchtop_spill_plane

He also has a set of usage instructions in PDF format for actually making spills with the plane. Swingley-spill_plane_directions